Spivak, well known for her translation of Derrida as well as some works by Mahasweta Devi, was awarded the Sahitya Akademi Prize for Translation in 1997

Spivak, well known for her translation of Derrida as well as some works by Mahasweta Devi, was awarded the Sahitya Akademi Prize for Translation in 1997

I am deeply honored that the Sahitya Akademi has decided to recognize my efforts in translating Mahasweta Devi’s fiction. I want to start by thanking Mahasweta Devi for writing such spectacular prose. I would like to thank my parents, Pares Chandra Chakravorty and Sivani Chakravorty for raising me in a family that was acutely aware of the riches of Bengali. My father was a doctor. But we children always remembered that my father’s Bengali essay for his final exam had been praised by Tagore himself.

And my mother ? I couldn’t say enough about her on this particular occasion. Married at fourteen and mother to children at fifteen and twenty-three, this active and devoted wife and mother, delighted every moment just to be alive, studied privately and earned her master’s degree in Bengali literature. from the University of Calcutta in 1937. She reads everything I write and never complains about the obscurity of my style….

Samik Bandyopadhyay introduced Mahasweta Devi to me in 1979. Initially, I was completely overwhelmed by her. In 1981, I found myself in the curious position of being asked to write about deconstruction and French feminism by two famous American journals, Critical inquiry and Yale French Studies respectively. I no longer know why this position then seemed absurd to me. Anyway, I offered a translation of Mahasweta’s short story “Draupadi” for Critical inquirywith the required essay on deconstruction traced through a reading of history.

When I now think back to that essay, I am struck by its innocence. I had then been away from home for twenty years. I had the courage to recognize that there was something predatory about the non-resident Indian’s obsession with India. Much has changed in my life since then, but this initial observation holds its truth. Maybe I should say it with more tact today.

Why did I think translating Mahasweta would free me from being an expert on France in the United States? I do not know. But this instrumentality has disappeared in doing. I rediscovered, as when I had translated Jacques Derrida’s book Of grammatology ten years earlier, this translation was the most intimate act of reading. Not only did Mahasweta Devi not remain Gayatri Spivak’s way of freeing himself from France, but indeed the border between French and Bengali disappeared in the intimacy of the translation.

The verbal text is jealous of its linguistic signature but impatient of national identity. Translation flourishes by virtue of this paradox. The border between French and Bengali has disappeared for this translator in the intimacy of the act of translation. Mahasweta rang out, made a dhvani (literally ‘resonance’), with Derrida, and vice versa. This raised some anger, here and elsewhere. 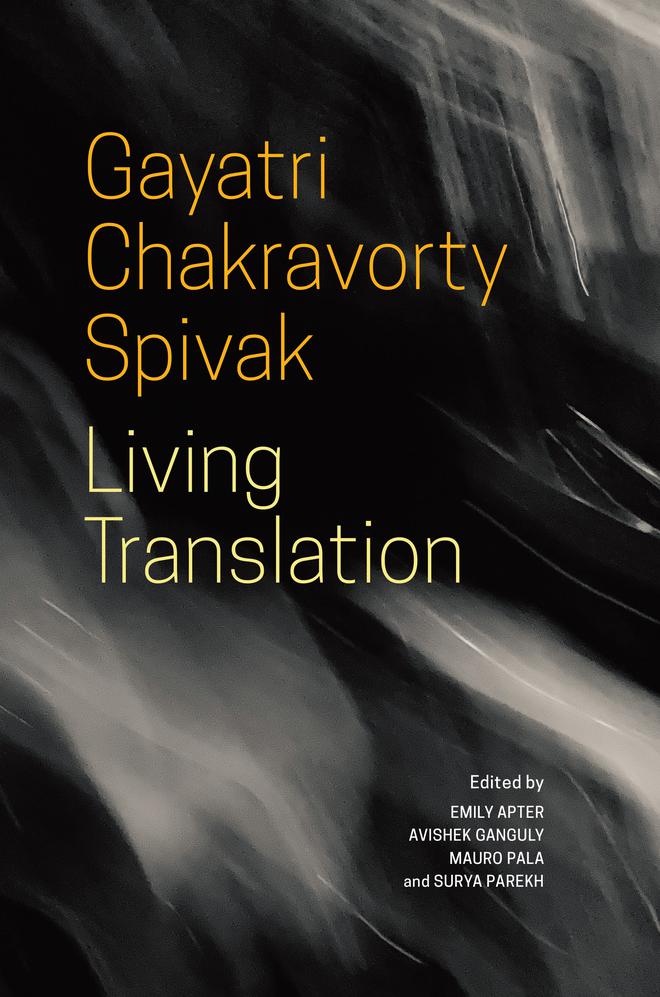 This is not the time to discuss unhappy things. But allow me to beg your indulgence for a moment and quote a few sentences, retaining the theory, which I wrote in a letter to my editor Anjum Katyal of Seagull Books, when I submitted to him the manuscript of my translation of ‘Murti ‘ and ‘Mohanpurer Rupkatha’ by Mahasweta Devi: [In these two stories] the aporias between gender on the one hand (“feudal” – transitional and subaltern) and the ideology of national liberation (as tragedy and as farce) on the other, also deserve to be pondered. But I’m a bit burned by the resistance to the theory of the economically restructured new reader who would prefer his own NRI, not shaken by the ice of global politics and local experience.

And so I let it rest. This harsh sentence at the end reflects my pain and sorrow at the throwaway remark on Gayatri Chakravorty Spivak’s “sermon” offered by the reviewer, in India todayof imaginary cards (Routledge, 1995), the very book you have chosen to honor. I was hurt, of course. But I was grieved because ‘lecturing’ was also the word used by Andrew Steer, then deputy director for the environment at the World Bank, in 1992, when I suggested to the European Parliament that the World Bank reconsider its constant self-justifying and fetishistic use of the word people.

…(M)e concerns the constitution of the ethical subject – as life/translator (Klein), narrow sense/translator, reader-translator (RAT). Why did I decide to gild the Mahasweta lily? Shri Namwar Singh, professor of Hindi at Jawaharlal Nehru University, who chaired the event, will recall that professors from the Department of Modern Indian Literatures at the University of Delhi asked me in 1987 why, when the Bengali had Bankim and Tagore, I had chosen to talk about ‘Shikar’, one of the stories included in imaginary cards.

… My devotion to Mahasweta did not need national public recognition. To ignore the narrative of the action or the text as an ethical instantiation is to forget the task of translation on which the human being rests. Translation consists in passing from one to the other. In Bangla, as in most North Indian languages, it is anu-vada — talk afterwards, translation like imitation. This relation to the other as a source of enunciation is ethics as being-for. All great literature, like all specifically good deeds – any definition would raise the question here – celebrates this. Acknowledging this is not “lecturing”, one hopes.

Translation is therefore not only necessary but inevitable. And yet, as the text keeps its secret, it is impossible. The ethical task is never quite accomplished. “Pterodactyl, Puran Sahay and Pirtha”, one of the tales included in imaginary cards, is the story of such an inevitable impossibility. The aboriginal Indian is sidelined or altered by the descendants of the former settlers, the ordinary “Indian”. Faced with the radically other, the prehistoric pterodactyl, the aboriginal and the settler are historically human together. Pterodactyl cannot be translated. But the aboriginal and the settler Indian are expressed in silence and in the ethical relationship. This founding task of translation does not disappear by fetishizing the mother tongue.

Sometimes I read and hear that the subordinate can speak in his mother tongue. I wish I could be as sure of myself as the intellectual, the literary critic and the historian who says so in English. No speech is a speech if it is not heard. It is this act of hearing in order to respond that we can call the imperative to translate. We often confuse this with helping people in difficulty, or urging people to pass good laws, or even insisting on behalf of others for the law to be enforced. But the founding translation between people is listening with attention and patience, in the normality of the other, enough to see that the other has already silently made this effort. This reveals the irreducible importance of the idiom, which a standard language, even a native one, cannot cancel.

And yet, in the interest of the primary education of the poorest, while awaiting the private norms of democracy, a certain standard language must also be shared and practiced. Here we try to nullify the impossibility of translation, to temporarily deny Saussure’s warning that the historical change of language is inherited. The most difficult problem here is the translation of the idiom into the norm, something outdated among elite progressives, without which the abstract structures of democracy cannot be understood.

Paradoxically, here, idiomaticities must be treated with the greatest care. I recently discovered that there is no Bengali-Bangla dictionary for this level (primary education of the poorest) and adapted to this task (translation from the idiom to the standard). The speaker of some form of standard Bengali cannot hear motivated subaltern Bengali unless organized by a politically correct edition, which is tantamount to relief from above. It is not possible for us to change the quality of rote learning in the lowest sectors of society. But with an easy-to-use dictionary in the same language, a spirit of independence and verification in the service of rule-governed behavior – essential ingredients for the daily maintenance of a democratic regime – can still be encouraged.

The United Nations, and non-governmental organizations in general, often speak triumphantly of the creation of a certain number of schools. We hardly ever hear follow-up reports and, of course, we don’t know what’s going on every day in those classrooms. But a dictionary, translating from the idiom to the standard while resisting the necessary impossibility of translation, travels everywhere. Only in this way can subalternity painfully translate into a hegemony that can use and overcome all the help and resistance that we can organize from above. I have no doubt about it….

Today, as we speak of accepting our rewards for translating well from the twenty-one languages ​​of India, I want to say with particular emphasis that what most of the electorate future needs to access, in the long term, democracy, rather than having their votes bought and sold, these are practical and simple dictionaries of the same language which will help to translate the idiom into standard, in all these languages . I hope the Akademi will move towards meeting this need.

For my part, I can’t help translating what I love, yet I resist translating into English; I never teach anything that I can’t read in the original and constantly modify printed translations, including my own. I think it’s a bad idea to translate Gramsci and Kafka and Baudelaire into Indian languages ​​from English. As a translator, I therefore carry out the contradiction, the counter-resistance, which is at the heart of love. And thank you for rewarding what doesn’t need to be rewarded, the pleasure of the text.